Why You Knee-d A Bike Fit!

Our good cycling buddy Richard @ABriskwind had been having trouble with one of his knees which has hindered him conquering some of Surrey's Queen climbs. Our heart did go out to him as you could see the frustration etched into him when he knew he could easily get over the ascents if his knees weren't giving him aggro. So he decided to do something about it...

So the question. Is getting a professional bike fit for an amateur cyclist worth it? 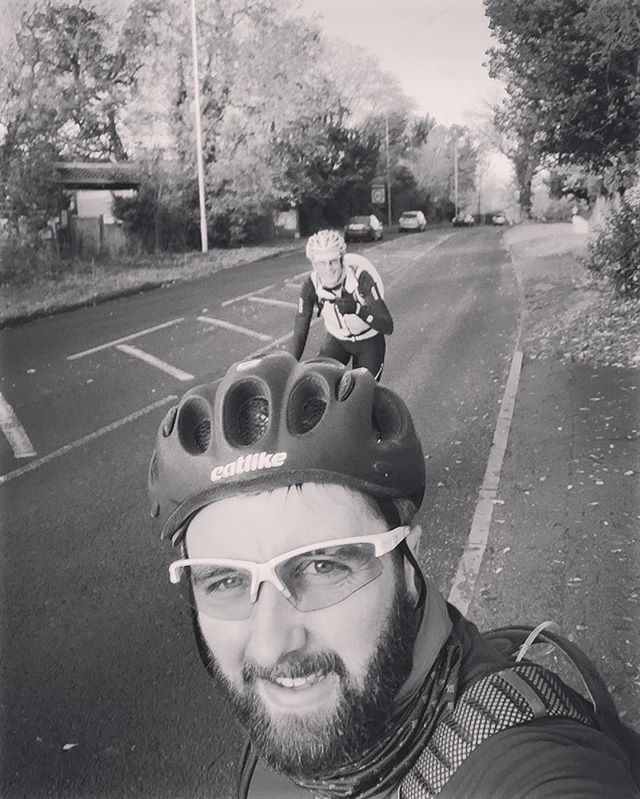 To answer that question, I need to to give you a back story. I started to use a road bike in 2013 and since then I've twice done the London to Brighton (2013 and 2014) and the Prudential Ride 100 (2014 (or should that be Ride 86) and 2015. At the end of 2015 my wife and I had a little boy so as you can imagine priorities changed, but the excitement for cycling did not, what with the headwind in my face, rain in my hair...wait that's not right. So whenever I got the chance, out I would go and with some great people too I might add, Ben @notinthepeloton included.

As months went by, I found the more I increased my mileage, the more uncomfortable I felt riding. Even with incremental increases in mileage. My lower back was aching, calves felt tight and even the right knee started to twinge when increasing elevation. At first I thought I needed to increase the amount of post ride stretching, however this didn't help.

The middle of July 2016 saw a group of us on a ride organised by @UKCycleChat, @Dirtywknd and @notinthepeloton. 65 miles of rolling hills including Barhatch (there is another name for this hill…), Leith Hill and Box Hill to name but a few. Barhatch [tick], Leith Hill [tick], Box Hill...Box Hill...Box..........? Nope, before I got to Box Hill, it felt like the outside of my right knee had just exploded. All the power that was in the knee had shot out to one side causing nothing but pain. Spinning as gently as I could I eventually got to Box Hill and rode with the rest of the group to complete the ride.

Fast forward a week later to a solo ride and my knee still hadn't recovered. It started off well but 30 miles into a fairly flat ride, I could feel the knee starting to go. Push on, it will be fine (it's what most of us do right?) but no, BANG, again it went after 50 miles and a slow ride home was now on the cards.

Cycling over the next 6 weeks even with 3 weeks off, it didn't get any better. So I got chatting to Dave at Surrey Hill CycleWorks in Leatherhead. Although it's not my 'local' bike shop, Surrey Hills CycleWorks is the local bike shop for me (honest, knowledgeable and can make a decent brew). Dave offers a bike fitting service using the Body Geometry Fit process, with or without HD video capture, using either your bike on a turbo trainer or the Retül Muve bike (ideal if you are looking to get a new bike and want to find the optimum position in readiness).

On the morning of the fit, Dave had my bike ('The Beacon'), setup on the turbo trainer. Before I jumped on the bike and got on with it, Dave wanted to know more about the knee issues I'd been having, when they started, what I believed the triggers were etc. Dave also wanted to know about my future cycling goals.

He then proceeded to perform a physical assessment. Checking my strengths and weaknesses including my flexibility and surprisingly my core is quite strong...that was news to me! What Dave did identify was several muscle groups running through the pelvis were tight and to show how tight they were, he manipulated them which had me lean forward uncontrollably (imagine being winded but still able to breathe).

The next part was looking at the bike itself and seeing how I performed on the bike with its current setup. Looking at the numerous components (seat height, angle of stem, width of handlebars etc) and getting me to ride to review my position on the bike etc.

Having done the bike review, next came the combination of parts one, two and three to make adjustments on the bike and replace / remove any necessary components. On the bike, Dave lowered the saddle and moved it forward. The drop to the handlebars was lowered too. On 'me', Dave added an extra wedge inside my right shoe, to help further align my right knee, and adjusted the position of both cleats. Dave then got me back on the bike at different intensities. The tightness that I had felt around the right side of the pelvis when in certain positions had gone. The difference was immediately noticeable and positive.

Dave went through all of the changes and why they were necessary. What followed next was another tea, I do like my tea, some cake and advice – including how to perform some additional off-the-bike stretches. Dave explained that you get used to riding in a set position for so long, that the bio-mechanical changes in the body have to get used to the changes on the bike. Given that he made changes in centimetres, they were fairly significant. There is a follow-up appointment which is offered as part of the post fit to make sure you are comfortable and adapted to the changes. If not, then they will be reviewed.

So to go back to the original question. Is getting a professional bike fit for an amateur cyclist worth it? In my opinion, the answer is yes. Here's why...

Several weeks later Ben @Notinthepeloton asked if I would be interested in a charity ride which covered just short of 100 miles in and around London. I was more concerned about the knee than the busy London traffic, but agreed to do it. Ride over, I was tired, hungry and wet BUT no knee issues! THANK YOU DAVE!!!! (More cake will be delivered!)

In my opinion, to really get the benefit out of the bike fit:

- Have an open mind

- Think about your style of riding

- Really think about those goals for the coming season / year ahead

- Really communicate how it feels on the bike, don't leave out any details

- If adjustments have been made during the bike fit and something doesn't quite feel right, mention it

- Don't make any adjustments to the bike yourself post-fit. Speak to the person who performed the fit

To find out more about the Body Geometry fit and how it can benefit you, give Dave a call or pop in at in .Surrey Hills Cycleworks.